This is a good starting point to understand the basic structure of the power grid and how it all works.

Unlike water, natural gas, firewood, food, or anything else you consume in your home, electricity is used instantaneously. That means that as soon as you flip your light switch on, a generator has to produce more power. The power grid orchestrates that process on an epic scale and with near perfect results, a feat that in 2003 the National Academy of Engineering called the greatest achievement of the 20th century.

This post contains a high level overview of the different components on the power grid, drawing heavily from the overview and Industry Primer by the EIA. This will be very basic to people who are familiar with the industry; the target audience here is people who are just starting to work with utilities, as many of our customers are. This should provide a useful baseline to start understanding the industry. This post is US focused, but has relevance for all geographies.

The key components of the power grid are: 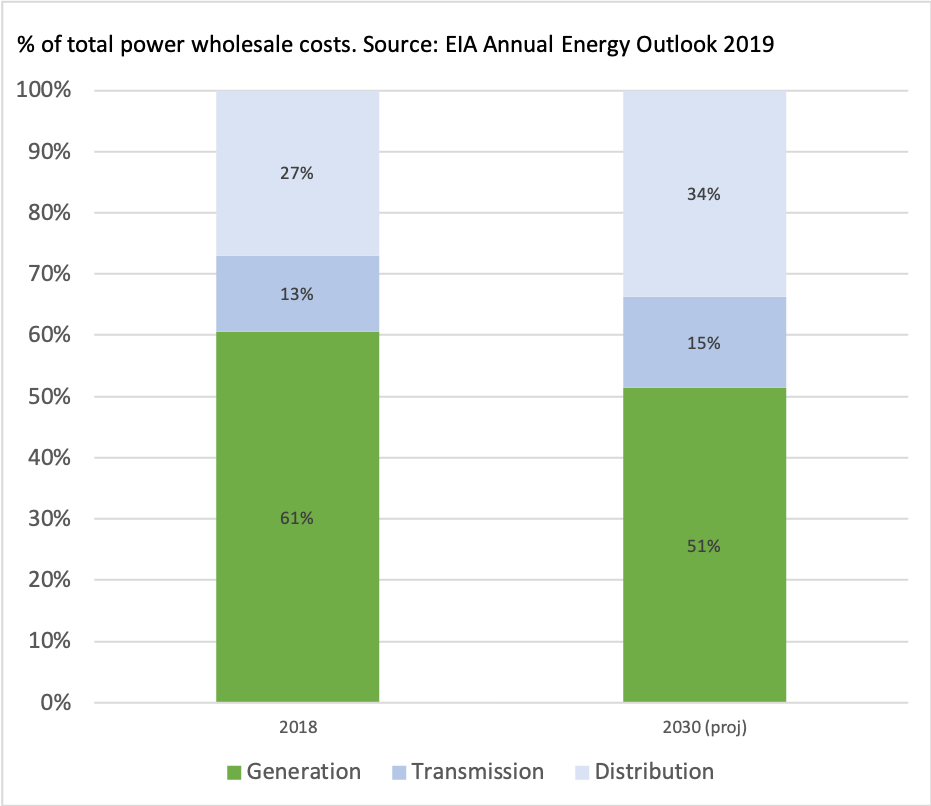 Electricity generation throughout history has been dominated by fossil fuels. Historically this has been coal, but due to the advent of fracking and the subsequent decline in natural gas prices, natural gas has taken over as the main power source. Nuclear power has also consistently provided about 20% of total power production over the last few decades. Some of these are more nimble than others, but fundamentally all of these are “dispatchable” or at least controllable: they can be ramped up and down as demand requires.

Wind and solar power ("other renewables" above) are an increasingly significant part of the power generation mix, and provide a paradigm shift for grid operators because they are not dispatchable - you get power generation when the wind blows and sun shines. The higher the proportion of non-dispatchable energy on the grid, the more orchestration is required to make sure there’s enough energy available at all times. In 2018, wind and solar were already about 10% of the total generation mix. This is a small but quickly growing power source; in many parts of the country wind & solar make up over 30% of the local generation mix and are having significant effects on load balancing. This shift towards variable renewables is the most important macro trend in the utility industry.

While generation is most typically thought of as just generating electricity, this misses a key part of the value the grid provides: reliability, or the knowledge that whenever I want to use power, I can. The grid has to supply reliable power 24 hours a day, 365 days a year. As a result, generators must provide additional services to maintain power availability, reliability and quality. This comes in two primary forms:

These capacity and ancillary services markets are a major component in the overall generation markets.

Transmission is the large-scale sibling of the power line network - huge lines that carry large amounts of power across huge regions. According to Russell Gold's book Superpower, there are about 160,000 miles of high voltage transmission lines across the country - more than 3 times the size of the US interstate system. 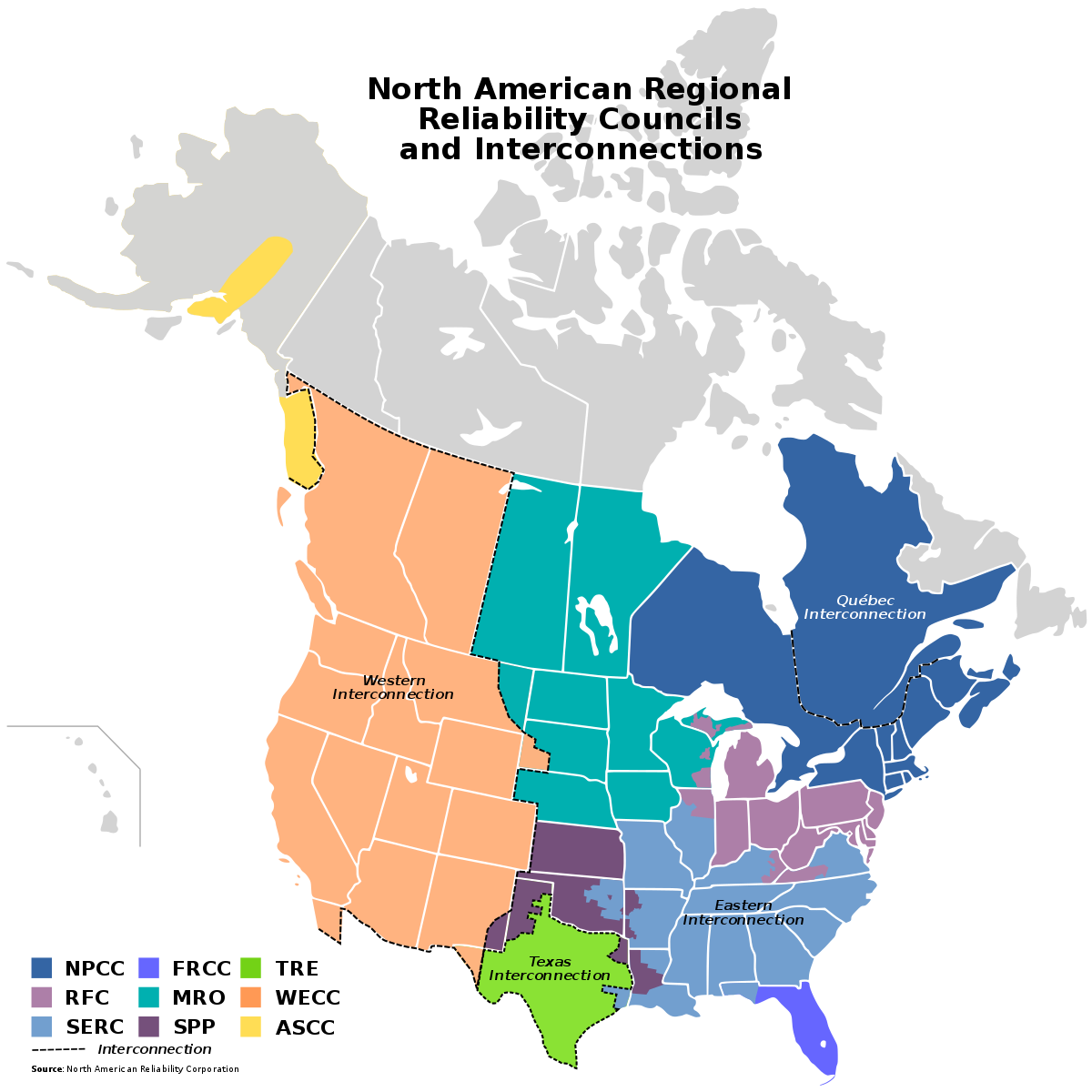 Within the main interconnections, transmission is further broken down into many subregions, with balancing authorities responsible for maintaining supply and demand balance in their local grids, as depicted in the image above.

One of the major stories in transmission is how hard it is to build substantial new transmission lines due to land rights and local opposition. If the country could, for example, generate massive amounts of solar in the southwest or wind in the midwest and transmit it all across the country, that would ease much of our renewable integration issues. Instead, we have significant transmission bottlenecks. Superpower documents the trials and tribulations involved in a mostly unsuccessful attempt to build more large power lines across the country.

Distribution makes up the millions of miles of lower voltage, lower capacity power lines that ultimately deliver power to homes and businesses. While Transmission is the domain of whole states and groups of states, Distribution is at the level of counties and cities. Transmission is about balancing power over massive land areas, distribution is about ensuring each block of every neighborhood keeps the lights on at all times. This is what most people think of as my utility.

This means that the distribution network must be scaled to accommodate load growth at a local scale. An example of local load growth (which causes strains on local grids) could be an increase in Electric Vehicle ownership. A typical American suburban home may draw between 5-10kW of peak power (usually due to heating or air conditioning). A typical EV home charger bought today would draw about 7 kW. So, if the EV is charged at peak times, adding an EV to a block has a similar effect on peak load as adding a new home, something the utility has not planned for. If it is charged off peak or overnight, it has a minimal effect.

While overall EV ownership is only about 1% of total car ownership, ownership and usage tends to come in clusters. So, if my neighbor has an EV, I am more likely to buy one too. If my block has multiple EVs, chances are we are all coming home from work and plugging them in to recharge at about the same time, as well as running our A/C and other appliances. If the utility does not upgrade the local grid capacity in time or find a way to push people to charge overnight, that will overload our transformer and cause local blackouts on a regular basis. We will not be happy about that and will be happy to share our feedback with the utility.

Distribution management is all about integrating resources onto the grid at a building by building level. As a result, distribution is on the front lines of integrating new power trends into the system, such as rooftop solar panels, battery storage, EV charging, and more.

Retail refers to all the administrative activities around end customer management: signing up customers, sending them monthly power bills and communicating about outages, etc. It does not involve any infrastructure: in most cases, even reading the power meter belongs to distribution.

While retail is a small part of the overall cost structure (according this paper by Paul Joskow, between 3.3 and 4.9% of the total cost to deliver electricity), this is where many end customers will see the most innovation on the grid, because it directly affects them. Innovation in retail could include:

Retail is the front line in dealing with end customers. Historically, this has not been a priority for utilities, as they focus primarily on Generation and T&D to make sure power is delivered safely and reliably. However, with the rise of rooftop solar panels, behind-the-meter batteries and dynamic load control options on everything from residential thermostats to commercial building management systems, retail is becoming a much more important part of the overall utility operation.

How are utilities regulated?

The simple answer is that utilities have historically been monolithic monopolies, and many still are. They own all the generation, transmission and distribution in their territory, and they have a monopoly mandate to provide retail services to all of their customers. The reason for this is that utilities, like roads, water, and other key infrastructure, are a natural monopoly, which means it is more cost effective to have one set of power lines that provide power for everyone than it is for multiple companies to build many competing power lines. To make sure utilities charge fair prices, they are heavily regulated by local, state and national government entities.

However, this is not the full story. Only the T&D part of utilities truly fall under the definition of a natural monopoly. Generation and Retail can be opened up to free market competition, and in the last few decades, they have been. Throughout North America, different markets are in different states of deregulation. Generally speaking, Generation is mostly deregulated, so a third party can come and sell power into a utility’s territory. With some exceptions (most notably Texas), retail is still fully regulated and utilities have monopoly control over their territories.

Ironically, despite the perception of the USA as a highly competitive and capitalistic economy, we are the furthest behind in the developed world in deregulating the utility sector. In international markets such as the EU, Japan, and Australia, the utility business is deregulated, with Generation and Retail both competitive. This presents an interesting case study where we can see how both markets do business and debate the merits of each.

With this basic overview, you can picture how different entities on the grid interact and where they fit in. In future blog posts, we will introduce and describe all of the different players on the grid.