Why we need demand flexibility to enable renewable energy growth

Renewable energy is self defeating - as more is added, the marginal value goes down. Demand Flexibility is one of the key solutions.

There's a fundamental economic issue that will have to be addressed as we shift towards a renewable energy power supply: diminishing marginal revenue. As we add additional solar panels into a given region, they will be producing power at the same time as all of the other solar panels in the region. Renewable energy produces at essentially zero marginal cost - so they will lower the clearing price for power at that time. As more solar is added, the clearing price continues to decline, and as a result revenue for power generation on the whole decreases. Wind sees the same effect, since wind turbines will typically generate at the same time across a geographic region.

Fossil fuel and nuclear generators, however, produce electricity round the clock, so they can make up a portion of the lost revenue at times when overall renewable supply is low. Renewable energy generators do not have that same opportunity. Fortunately, though, renewable energy does benefit from a learning effect: a well documented effect where cost to install new capacity decreases as the number of installations increases. So, each additional unit makes less money but also costs less, and whether it remains profitable depends on which decreases faster - a race to the bottom!

A new paper estimates which will win out, and its conclusion can either be read as glass half-full or glass half-empty. The learning effect should just about make up for the revenue degradation effect, although there is a minor edge towards the revenue effect being larger and renewables becoming less profitable. Either way, this marginal revenue effect will be a big drag on renewable energy's potential and speed to market. A race to the bottom is not what we want to bet the future of the planet on.

To give some numbers to this revenue degradation: the paper determines that as solar penetration increases from 0-30% of total generation, revenue per kWh of solar produced will decline by 38%. It also defines the economic potential of various regions in the US as the point at which adding more wind or solar actually leads to overall revenue decline for generation, and finds that economic potential is about 20-40% of total capacity - far from the 100% we need to get to! The following chart from the paper shows the "economic potential" for wind and solar in markets across the USA (the horizontal bars). 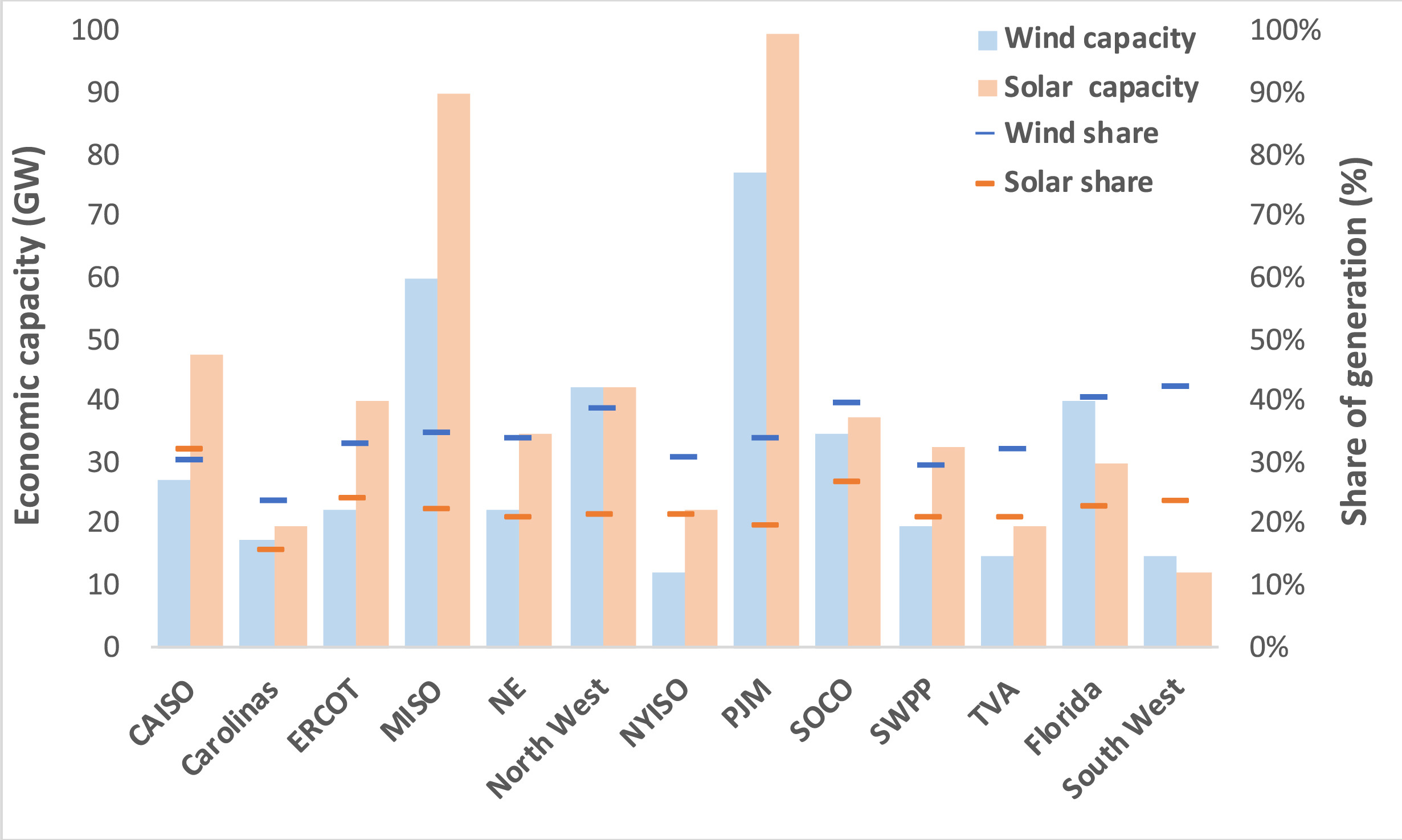 Imagine markets where solar dominates generation: mid-day early summer power is essentially free, and midnight winter power is extremely expensive. We are already seeing signs of this future today in California, where zero-price hours in the middle of the day are becoming common in sunny, low demand months like April and May. California has to curtail solar and wind generation at increasing rates every year to prevent oversupply: April 2020 saw almost double the amount of curtailment of April 2019 (a combination of increased solar generation, and depressed demand due to Covid-19). 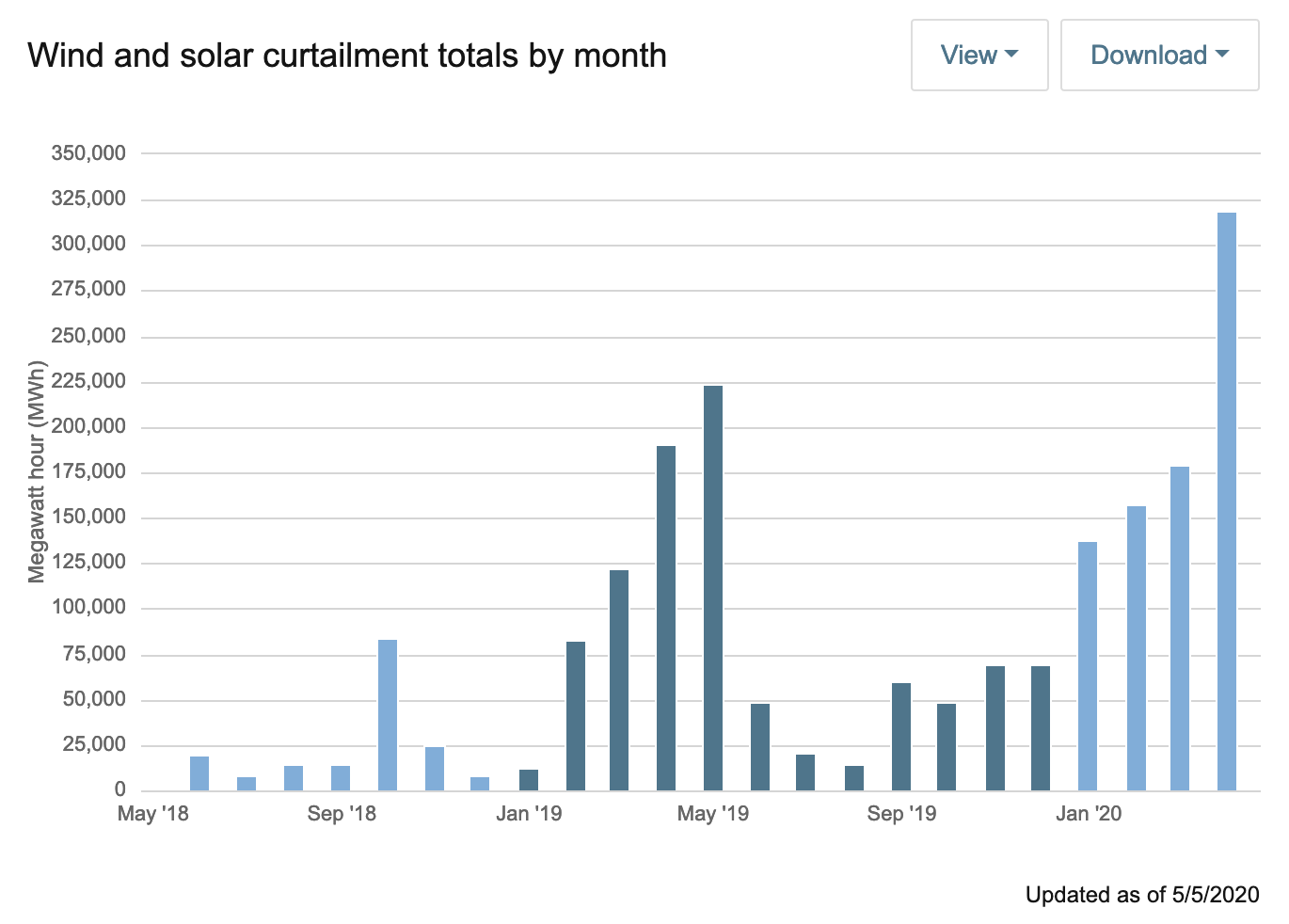 Wind power dominated regions such as Texas are also facing this issue, with excess high generation and low demand periods causing zero or negative power prices. This is just a taste of things to come - as more renewables are added, it will happen more frequently. As the authors note, there are three fundamental ways to resolve this issue - transmission, energy storage and load flexibility - that can change either when or where the power is being consumed, shifting from high price to low price.

Expanding transmission capacity allows power generation and consumption to be balanced across a much bigger area. Rather than just consuming power from local power plants we could, for example, generate a lot of solar in the sunny southwest and transmit it across the country to Canada. Or, if the wind is not blowing in Oklahoma and it is in the Atlantic, we can transfer it accordingly. This would reduce the overcrowding issue significantly, and most projections of a 100% renewable grid lean heavily on increased transmission capacity. However, transmission is expensive and increasingly difficult to build due to land use rights. Any additional transmission we can build is a benefit, but will need political will to ensure it happens - something we can't count on.

Grid-scale energy storage is something of a technology silver bullet, since it can store and discharge power whenever needed. However, scale is an issue. The total generation capacity of the US Grid is about 1,100 GW, while current battery energy storage capacity is about 0.1% of that (not including pumped hydro, which is not expected to grow significantly). So we need to grow the storage capacity astronomically, at a huge up-front capital cost. This growth will certainly happen, especially as batteries continue to get cheaper, but we should also tap into what is already available: load flexibility.

Load flexibility (aka Demand Response) is similarly capable to energy storage at shifting when energy is consumed. The main benefit is that the majority of the capacity is already installed or will be installed naturally due to appliance turnover - we just need to unlock it. Water heaters, thermostats, building management systems, behind the meter batteries, EVs and more will all be critical components allowing us to shift load to use more power when renewable energy is available (and energy is cheap), and less when it isn't. Demand response figures into California's plans to stop dumping clean energy down the drain, among other things, and will continue to grow in value.

A heavy dose of "all the above" will be needed to transition the grid to fully clean energy in the 21st century. Load flexibility already plays an important role, and as we can see it has a long way to grow. As we increase renewable energy penetration, appliances that can shift their consumption towards when electricity is cheap and clean will only become more valuable. Companies that find profitable ways to participate in this trend now will play an important role in this transition, and reap the rewards for many years to come.